The All Blacks had lost 47-26 on their previous trip to Optus Stadium in August 2019 but there was to be no repeat result for the Wallabies, who had already lost twice to their trans-Tasman rivals in Auckland last month.

Beauden Barrett kicked a pair of penalties to make it 6-0 to the visitors before putting his boot to good use in open play too, a clever grubber creating the chance for brother Jordie Barrett to get the opening try of the game.

However, the full-back’s involvement in the contest only lasted a further 12 minutes. Claiming a high ball, he caught Marika Koroibete in the face with an outstretched boot while still in the air, leading to a contentious red card for dangerous contact with the head.

Despite being down to 14, New Zealand extended their lead before the break to 18-0 when David Havili grabbed the first of his two tries, the other coming just after the hour mark as the second half saw a glut of points.

Folau Fainga’a gave Australia hope 10 minutes after the interval with a try that Noah Lolesio converted, yet the All Blacks responded impressively, moving the ball across the line for wing Will Jordan to waltz over.

They also exploited turnovers ruthlessly, both Havili and substitute George Bridge crossing after Australia had lost possession, the latter benefiting from a superb kick into space by TJ Perenara.

In between, Anton Lienert-Brown went over from Akira Ioane’s inside pass near the touchline, New Zealand easing to a bonus-point triumph that sends them top of the Rugby Championship standings after two rounds.

Substitute Nic White forced his way over for a second Wallabies try, while they had the last say in terms of the scoring with Tom Banks’ 79th-minute effort converted by Reece Hodge, but the hosts were already condemned to another heavy loss that leaves them bottom of the table.

Jordan’s second-half try means he has now scored in six consecutive Test appearances, the best streak by any player from a Tier 1 nation since the beginning of 2010. His latest effort was put on a plate for him by his team-mates, with the impressive Ioane breaking free of a tackle to create the simple finish after some neat handling had stretched the Australian defence out wide.

Barrett off, All Blacks still march on

Koroibete was certainly at the centre of the early action. He had already seen a try ruled out by the TMO by the time he was hit by Jordie Barrett’s boot. However, the Wallabies were unable to capitalise when having an extra man on the field, with the competition’s rules allowing a replacement to come on after a 20-minute period. 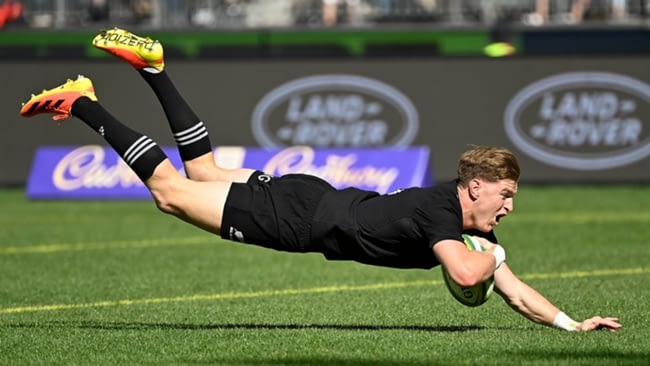