Mikel Arteta is under pressure at Arsenal
Arsenal remain in “good shape” and have “potential” despite a shoddy start to the season, insists club legend Arsene Wenger.

The Gunners started the campaign with a dismal 2-0 loss at newly promoted Brentford and followed that up by losing by the same scoreline at home to Chelsea.

A 6-0 win over West Brom in the EFL Cup brought brief respite but Arsenal were then steamrollered 5-0 by champions Manchester City on Saturday – a match that saw Granit Xhaka sent off.

Although still in the infancy of the Premier League campaign, only one other side (Wolves) has failed to score this term, while only Crystal Palace have registered fewer shots on target that Arsenal’s seven and there are just five who have created fewer chances than their 26.

When placed in the context of Arsenal shelling out the most money during the transfer window (a reported £123.3million) to land the likes of Ben White, Aaron Ramsdale and Martin Odegaard, the situation looks bleaker still.

The pressure is building on boss Mikel Arteta as a result but Wenger, who won the Premier League three times and the FA Cup on seven occasions during a 22-year spell, called for calm in an interview with Bild.

“Today, the club is in good shape.

“They had two tough games [against Chelsea and Manchester City], the team has potential and I hope they can come back.”

Arsenal are back in action at home to Norwich City on September 11. 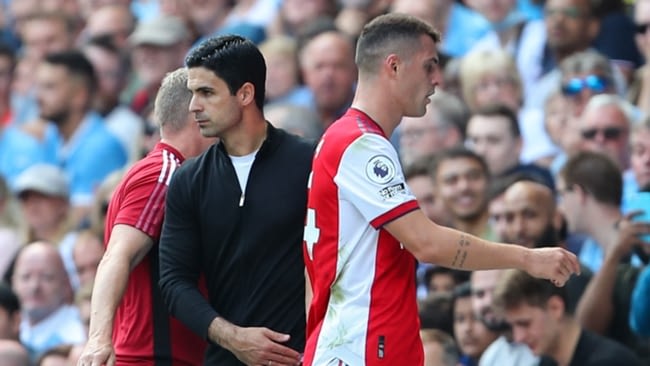